Ranan Lurie appears twice in the same Guinness Book of World Records, representing two very different categories.
He holds for 20 consecutive years the title of “The most widely syndicated political cartoonist in the world,” as well as
being a scion to the oldest recorded living family today: "His family is directly descended from the royal house of the
biblical King David and can trace its genealogy back to the 10th century BC."

Ranan Lurie was nominated by the Republic of Cyprus for the 2002 Nobel Peace Prize: "I am writing this letter to sponsor the
nomination of Mr. Ranan R. Lurie for the Nobel Peace Prize, for his excellent work as as cartoonist of international repute. Mr. Lurie has contributed greatly through his publications in the United States and in many other countries of the world, in creating a great spirit of understanding between the people of many races, and has helped in the effort of defusing political and other hot conflicts worldwide. For the Above reasons I have the pleasure of sponsoring his nomination.” (The Honorable Glafcos Clerides, President of the Republic of Cyprus)

Lurie was invited by twelve leading publications of the world, consecutively, to be their cartoonist in residence and launch their first political cartoons. They are: LIFE, THE WALL STREET JOURNAL, NEWSWEEK Int., TIME Int., U.S. NEWS & WORLD REPORT, FOREIGN AFFAIRS magazine, DIE WELT, Germany, The LONDON TIMES, The ASAHI SHIMBUN, Japan, NEUE ZURCHER ZEITUNG of Switzerland, YEDIOTH AHARONOT of Israel, and the AL AHARAM of Egypt.

He has been working on his “Uniting Painting” since the spring of 1968.

Lurie has been married for 50 years to Tamar, Senior Vice President of Coldwell Banker Real Estate and the leading broker in Greenwich, Conn., as well as the entire northeast U.S. They reside both in Greenwich and Manhattan, where they live on the 60th floor of a high-rise. They have four children: Rod (West Point), the movie director and screewn writer ("Deterrence", "The Contender", "The Last Castle") and Barak (Stanford University), lawyer and business executive, both of Los Angeles; Daphne (Williams College) Dr., psychologist, of San Diego; and Danielle (Stanford University) a movie director and screen writer; Five grandchildren: Hunter (18), Paige (17), Samuel (9), Maxwell (5) and Sasha (2).

T.R. Fletcher, Director, The International Advisory Board for the UNITING PAINTING

*"Ranan R. Lurie is the most widely syndicated political cartoonist in the wo rld. As of July 1998, his work was published in 103 countries in 1,105 newspapers with a total circulation of 104 million copies." (The Guinness Book of World Records 1999)

*"In January 1997, Chief Rabbi Lau of Israel and the Jerusalem Institute of Jewish Genealogy concluded that the
Lurie (or Luria) family is directly descended from the royal house of the biblical King David and can trace its
genealogy back to the 10th century BC. The Lurie family tree includes such distinguished members as the
prophet Isaiah (8th century BC), the Rashi (1040-1105), Hillel Hanasi ("the Elder"; 30 BC-1st century AD), Felix Mendelssohn, Karl Marx, Sigmund Freud, Salvador Luria, Yehudi Menuhin, Sir Immanuel Jakobovitz, and Ranan Lurie." (The Guinness Book of World Records 1999) 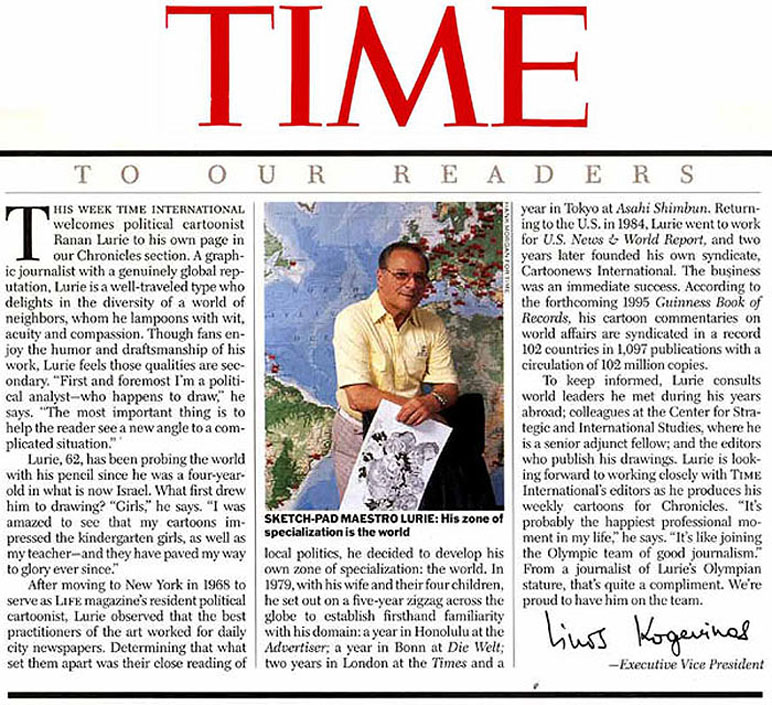 "The most influential political cartoonist in the world today." (Clare Boothe Luce, former editor of VANITY FAIR & co-publisher of TIME, in a forward she wrote for one of his books.)

BILL MOYERS proclaimed him "the dean of political cartoonists" on MSNBC television (Sept. 4, 1996).

THE WALL STREET JOURNAL portrays Lurie as "a master caricaturist."

"His cartoons, sculptures and oil paintings ... serve as historical documentation of the decade," THE NEW YORK TIMES quotes his exhibition curator.

America's leading  anchorman, Ted Koppel, writes, "I am in awe of Lurie's talent."

Lurie  taught at the University of Hawaii a regular seminar ("The Philosophy of the political cartoon") and lectured at many universities and colleges on current affairs and political cartooning.

In 1990, Ranan Lurie was invited to become an Adjunct Fellow at the CENTER FOR STRATEGIC & INTERNATIONAL STUDIES (CSIS), the Washington, D.C.-based leading think tank. In 1997 he became a Senior Adjunct Fellow, and in 2002 he was appointed a Senior Associate.

He's a member of the AMERICAN ASSOCIATION of EDITORIAL CARTOONISTS, the UNITED NATIONS CORRESPONDENTS ASSOCIATION, the FRIARS CLUB, the 101st Airborne Division Association, and the MENSA Society.

The NEW YORK TIMES publishing house wrote that "(his book) is perhaps the best selling political cartoon book ever published in this country." 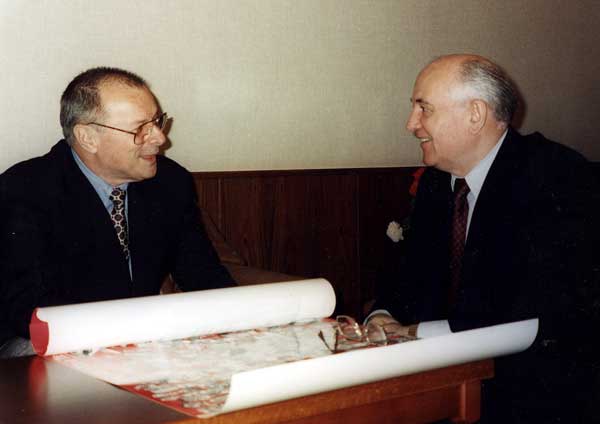 Interviewing President Gorbachev of the U.S.S.R.

As a result, Gorbachev and Lurie decide to start a mutual column (Gorby writes, Lurie draws the opposite "in principle") and the NEW YORK TIMES distributes the column all over the world for several years. 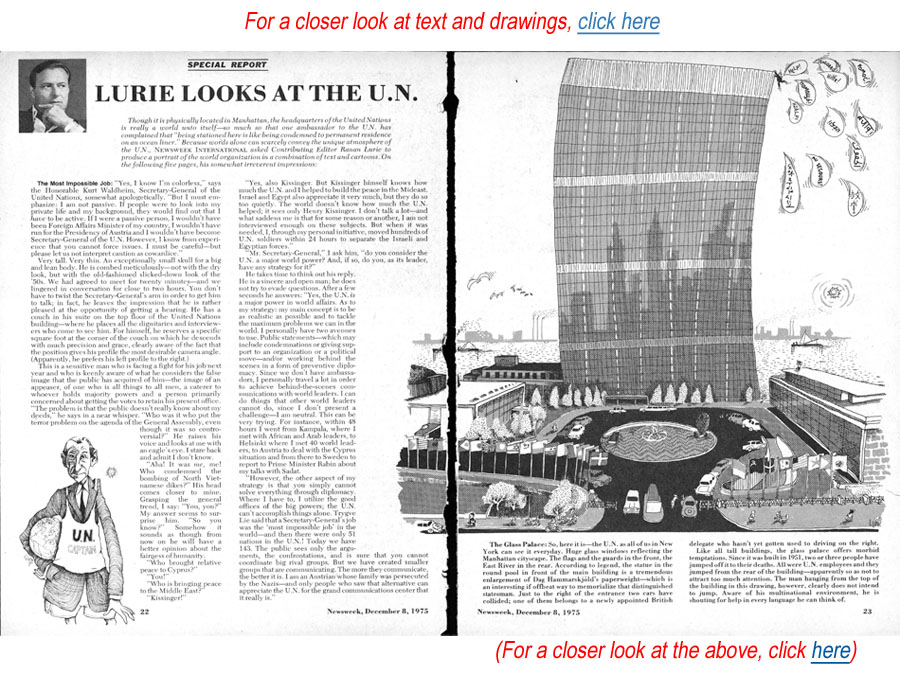 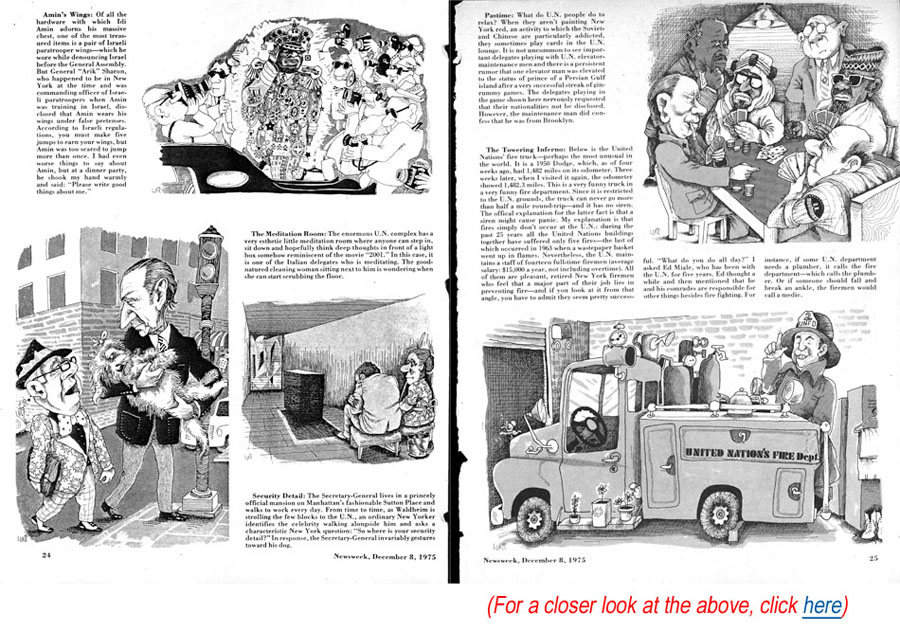 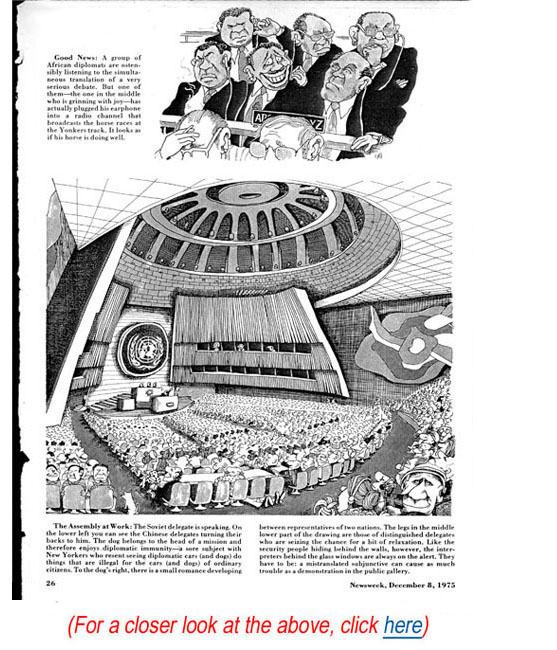 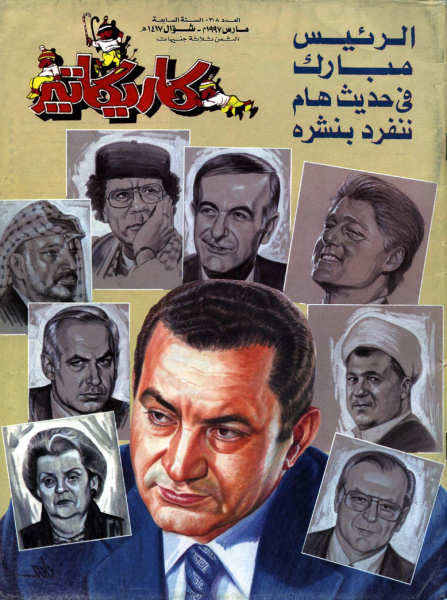 The cover of an Egyptian magazine, 1997 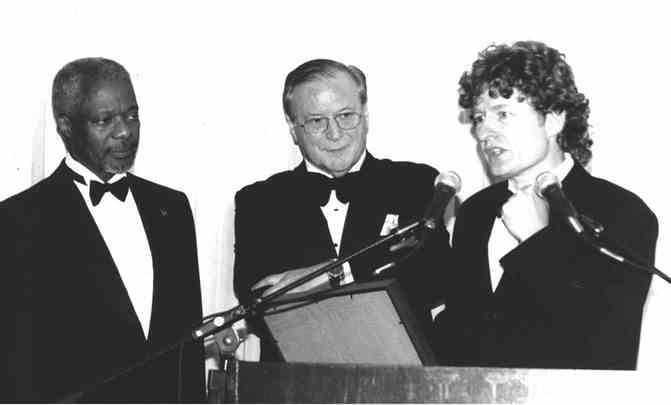 From left to right: United Nations Secretary-General, the Honorable Kofi Annan,
political cartoonist Ranan Lurie, after whom this major award is named, and
Mr. Peter Schrank, holding the award and speaking at the U.N. to a group of 300
ambassadors, movie stars and U.N. correspondents.

He was embeded as war artist with a Marine Company. Fallujah, Iraq, December 2004: 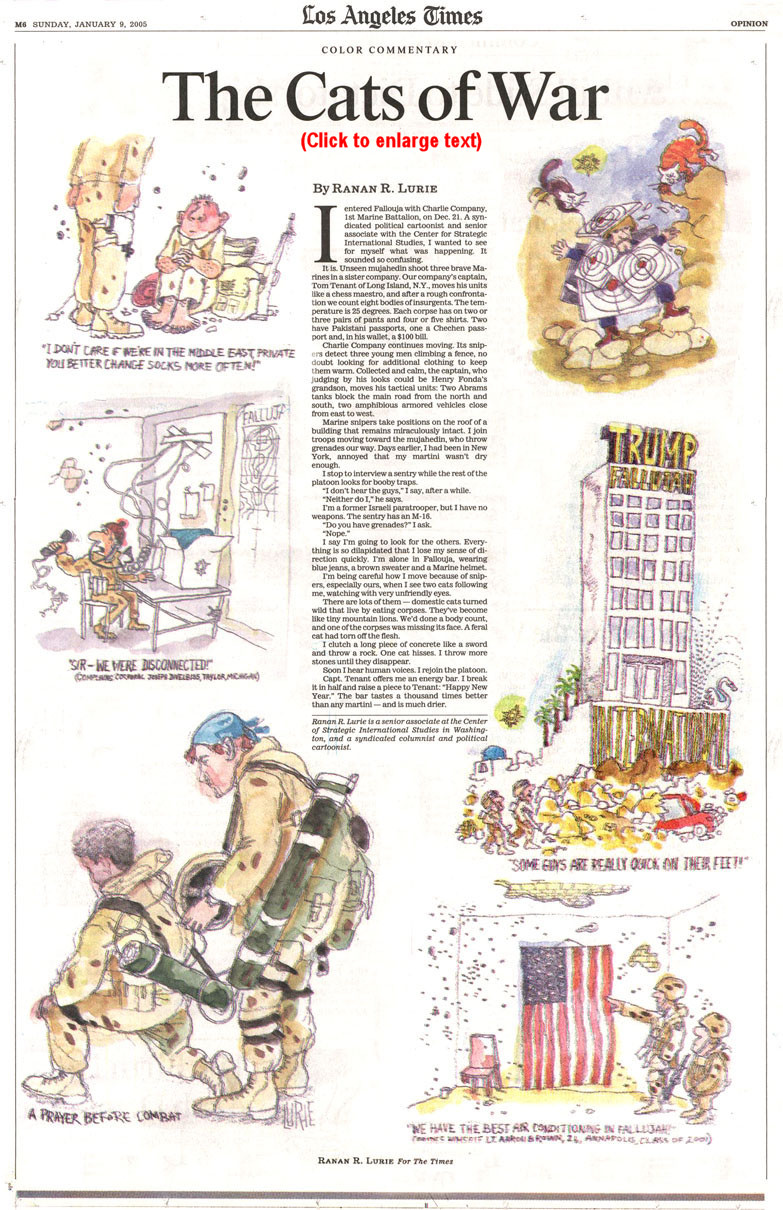